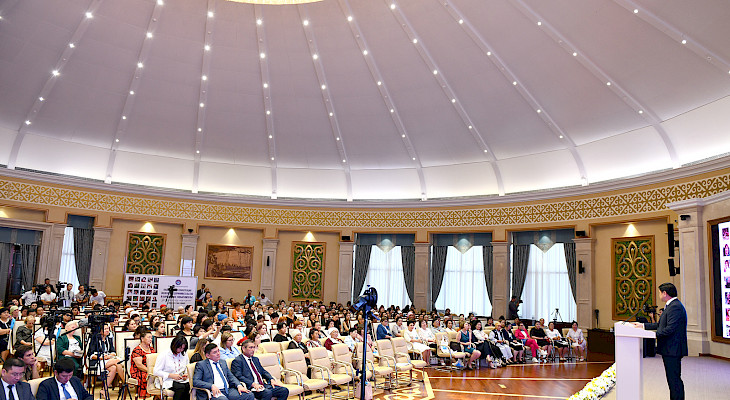 On July 11, Bishkek hosted the National Conference “Women’s Entrepreneurship,” which was attended by 400 women entrepreneurs from all regions representing various sectors of the economy. The main goal of the conference is to discuss problems, search for tools and resources for the development of women’s entrepreneurship.

Kyrgyz Prime Minister Muhammedkaly Abylgaziev spoke at the conference. According to him, developing small and medium-sized businesses in the regions, women entrepreneurs are actively involved in the implementation of President Sooronbai Jeenbekov’s policy on regional development. Concerning the issues of financial support for entrepreneurship, M. Abylgaziev emphasized that the Government is consistently introducing effective financial instruments to support the business sector.

In particular, the volume of loans to the economy in 2018 increased by 18.2% and amounted to about 130.5 billion KGS. The RKDF, OJSC “Guarantee Fund” are actively working here. Under the FA, rural producers were granted preferential loans in the amount more than 5.6 billion KGS. Entrepreneurs in the field of food processing and clothing industry will be given loans at 10%.

“At present, a mechanism for financing regional development projects in the amount of 2 billion KGS is being developed. Within two months, it is planned to develop and introduce a simplified procedure for issuing loans for women entrepreneurs by the Russian-Kyrgyz Development Fund, Aiyl Bank and RSK Bank. The issue is also being considered, according to which 40% of the financial resources of the Guarantee Fund will be provided to women entrepreneurs,” said the Prime Minister.

It should be noted that according to the data for the 1st half of 2019, GF provided 248 guarantees to women entrepreneurs (out of a total of 881 guarantees) in the amount of 285 million KGS (total amount of guarantees – 1.140 billion KGS). The share of female entrepreneurship in the total volume of guarantees was 28 percent. This indicates their great economic activity.