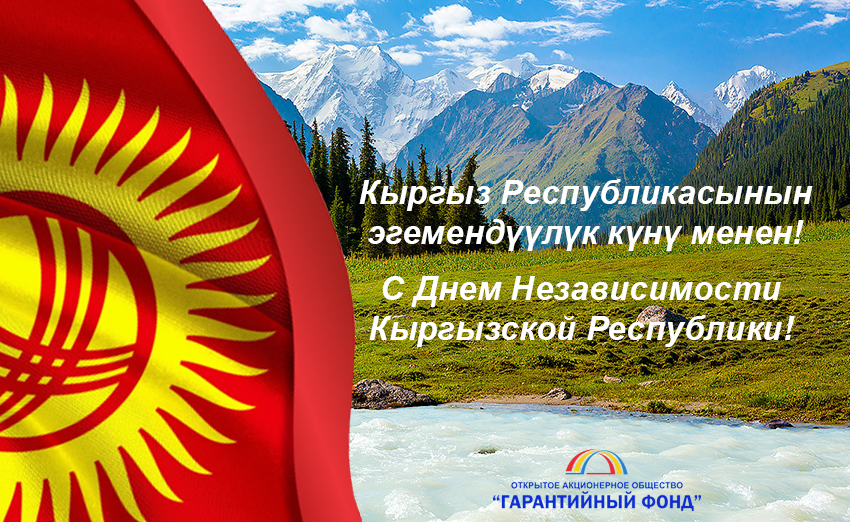 Today Kyrgyzstan is an independent state with its own role and place in the international arena, initiatives and projects aimed at developing the future.

Today, August 27, is the 60th anniversary of the Chairman of the Management Board of the Guarantee Fund Malik-Aidar Barktabasovich Abakirov

Dear Malik Barktabasovich! Please accept our most sincere congratulations on the 60th anniversary from our entire Guarantee Fund team! We believe that under your leadership, our foundation is able to achieve even greater heights and results! With all our heart we wish you well-being and good health. May there always be reliable friends and partners by your side, and may love and support by your family and friends give you strength for new achievements and success in all areas of your activity.

The team of the OJSC “Guarantee Fund”

The National Bank keeps the discount rate at 5%

The Board of the National Bank of the Kyrgyz Republic (the NBKR) has kept the discount rate (key rate) at 5 %. This was announced by the official website of the NBKR.

The NBKR noted that the development of the Kyrgyz economy is still influenced by external economic conditions and factors which have formed due to the measures to stop the spread of coronavirus. Despite the gradual recovery of economic activity in the world, the situation in the external sector remains uncertain.

It is expected that the return of economies to pre-crisis levels will take longer than previously predicted.

The spread of the pandemic and its negative consequences were reflected in a sharp decline in economic activity in Kyrgyzstan in almost all sectors of the economy, except for the agricultural sector and “Kumtor” enterprises. The indicators of the real sector of the economy are in the negative zone, having reached their lowest values ​​over the past few years. The volume of remittance inflows to the country remains below last year’s values, leading to more moderate domestic consumption.

The monetary environment remains stable. The short-term segment of the money market demonstrated an increase in rates within the background of an increase in the activity of market participants, while their fluctuations occurred near the key rate within the interest rate corridor established by the National Bank.

The banking system maintains a high level of excess liquidity, which is formed mainly due to expenditure transactions through the budget channel.

The National Bank continues to carry out sterilization operations, mainly in the short segment of the money market.

The deposit base and the loan portfolio of the commercial banks demonstrate stability in the negative economic environment, continuing their progressive growth. The domestic foreign exchange market is relatively stable, the volatility of foreign exchange rates against the som (KGS) has decreased.

“Taking into account the prerequisites for the external environment development and the emerging internal economic conditions, the National Bank decided to maintain the discount rate at 5 percent, taking into account the need to maintain measures to stimulate the real sector of the economy. In case of any risks, the National Bank has sufficient instruments to mitigate their consequences,” the statement says.

The next meeting of the Board of the National Bank on the size of the discount rate will be held on September 28, 2020.

The Government of the Kyrgyz Republic simplifies the requirements

The government of the Kyrgyz republic has simplified the requirements for loan issue by banks. The Prime Minister Kubatbek Boronov said this at a briefing on August 25.

“At the meeting with the heads of the banks, we obliged to ease 4 out of 7 basic requirements set by banks, that is, to receive them through the “Tunduk” system and digitize unclaimed borrowers. Now the state bank RSK and Aiyl bank work with this system. We hope that commercial banks will join,” – he said.

About certificates that are not required from entrepreneurs

Within the framework of the Intensive Sheep Breeding program developed by the Guarantee Fund, production of extruded feed was launched

In December 2019, the first guarantee was approved as part of this program. The recipient of the guarantee was a farmer Aralbek Abdyrasulov, who specializes in feeding sheep by stall keeping on his own farm near Bishkek.

He needed the guarantee support to obtain a loan for the purchase of livestock and extruders – machines for the preparation of locally produced feed. With the money received, the farmer bought 2 extruders with a capacity of 400 kg/h. Before that, the farmer used a small machine that produces 60 kg per hour. Thanks to the support of the OJSC “Guarantee Fund”, today the farmer, in addition to his main business – sheep breeding, has launched the production of extruded feed and their further sale to domestic farmers.

If we turn to the advantages of the method of stall breeding of sheep and the use of extruded feed, then, first of all, it is necessary to note the possibility of solving the problem of deterioration of the properties, fertility and productivity of the lands of the republic. Over the past few years, experts have been talking about the degradation of pastures in the country. And its main reason was called the irrational use of land, including livestock grazing on pastures.

Therefore, the method of stall breeding, production and use of extruded feed can play one of the main roles in solving the problem of pasture degradation. And this is not the only indicator in favor of the above method of raising sheep. In addition, this type of feed contributes to a more accelerated weight gain for sheep, gives a significant gain and significantly reduces the feeding period. This is achieved due to the increased digestibility of such feed in the animal body, which reaches up to 90%.

Another two factors in favor of extruded feed are the fact that for the preparation of such feed, cereals are mainly used, such as wheat, barley, corn, which are grown by domestic farmers, and the equipment for extruding feed is produced by entrepreneurs of the Kyrgyz Republic.

Considering that the method of stall cattle breeding is more effective and to date has not received mass distribution among farmers, OJSC “Guarantee Fund” has developed a methodological manual for farmers – livestock breeders. The manual provides recommendations for the use of methods and technologies for intensive fattening of animals that contribute to an increase in meat productivity. This methodological manual is intended to assist farmers in introducing stall keeping of sheep and technology for feeding with extruded feed.

OJSC “Guarantee Fund” sees the main prospect for the implementation of this program in the real possibility of increasing export potential in this direction. And also such prospects are real as: