As part of the adopted anti-crisis plan, administrative work is planned for a phased economic recovery. This was announced on May 7, 2020 by Deputy Prime Minister, Erkin Asrandiev, at a briefing.

According to him, it is planned to carry out administrative work to provide temporary work for some citizens.

Further training will be introduced free of charge, he concluded.

Erkin Asrandiev on anti-crisis measures: soft loans, fiscalization, way out of the shadow

Today, May 7, Deputy Prime-Minister for the Economic Bloc, Erkin Asrandiev spoke about the main direction of new anti-crisis measures.

It is worth to recall, the government on May 6, reports that funds for the second package of anti-crisis measures to support business were found. The plan contains 19 measures, within the framework of which loan programs for contracts and tax contracts, as well as restructuring of debts on taxes and social payments are provided. Support for business activities aimed at exporting and ensuring food security is also expected.

– Yesterday, at a government meeting, the second package of anti-crisis measures was approved. During its development, business proposals, independent experts, donor recommendations and parliament were taken into account.

The main direction is the creation of an anti-crisis fund which will deal with soft loans. The main emphasis is on concessional financing for business entities.

The plan also provides for an increase in the capital of OJSC “Guarantee Fund”, a review of obligations under tax contracts for those who have temporarily suspended their activities due to the state of emergency.

For the preferential financing, at first stage, we plan to collect about 14 billion KGS for the implementation of this plan, during the 2020-2021, we will bring amount to 40 billion KGS. Now, we are considering sources of financing. Both external and internal sources are involved. Internal, mainly, via the optimization of government spending, as well as the restructuring of external debt. Kumtor funds will be involved.

According to external sources, an agreement has already been reached with the German Development Fund (KfW), and the European Investment Bank. We are negotiating with other donors.

Other sources are the Eurasian Fund for Stabilization and Development and the Russian-Kyrgyz Development Fund. The RKDF has its own financing program, but it has available funds that we plan to attract to the fund.

The main areas of financing – production and processing, which focus on export and import substitution. Food safety related projects, too. We see that small business has orientated itself and began to produce antiseptics, masks, personal protective equipment. The program will also include this component.

It is also planned to provide unsecured loans for the self-employed population.

An important component is stimulating the transition to digitalization. For those entrepreneurs who will introduce digitalization (KKM-online, electronic invoices), even more attractive lending conditions will be offered.

A separate component is support of regional projects.

The plan continues to be finalized, additional proposals from the business and the opinions of the consultant are considered.

We assume that the loan terms will be from 3 to 7 years. Vacations on the main loan amount up to 12 and 18 months. Interest rates of 4-8% per annum in the national currency are 2-2.5 times cheaper than commercial loans. It is projected to cover 25-30 thousand business entities.

To solve the problem of unsecured security at the initiative of the National Bank, it is planned to double the capital of OJSC “Guarantee Fund”.

In addition to financial and fiscal measures, administrative measures are envisaged: providing jobs for unemployed citizens, the gradual resumption of activities, the organization of free training, retraining, advanced training.

We also began working on a document aimed at the post-crisis period of 3-5 years.

– How is the redistribution of funds from abroad?

– They are sent to support the budget. Not all the amount that is voiced in the media has been received. On population issues, about the distribution of funds, we are preparing information, and soon will make it public. 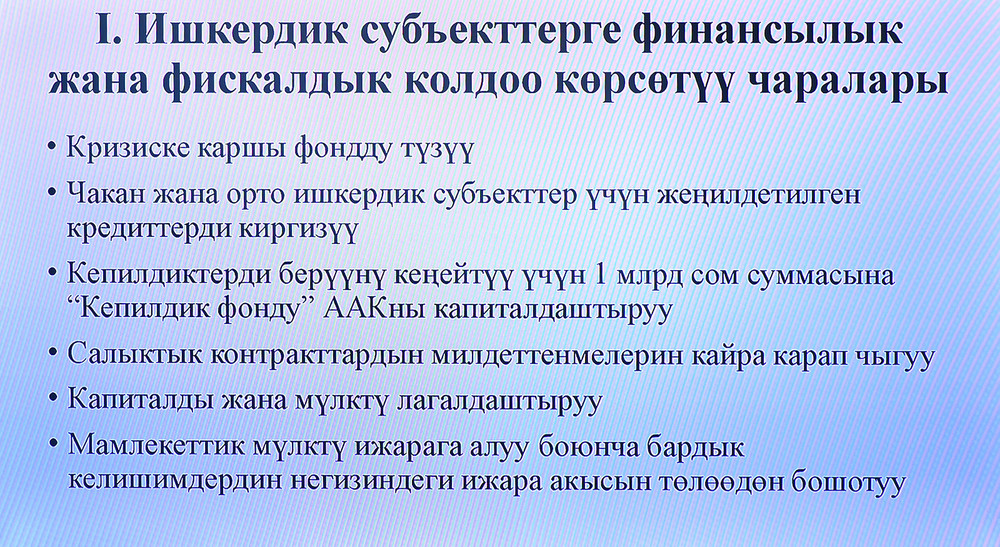 In order to provide additional support for business and the gradual economic recovery, the Government of the Kyrgyz Republic has developed a second package of measures to support economic sectors and business entities.

The second package of measures provides for a phased resumption of economic activity and financial support measures are proposed.

Particularly, it contains 19 events that provide for the program of preferential lending to business entities and a number of fiscal measures aimed at revising the obligations of tax contracts and restructuring tax and social security debts. Support is also expected for business activities aimed at exporting and ensuring food security.

“We found sources of financing. Approximately, we are talking about 40 billion KGS. Among them, 4.2 billion from Kumtor account, 14 billion KGS from donor accounts, 4.3 billion KGS – following the results of the restructuring of external debt. Also, about 17.5 billion KGS from other sources, such as the RKDF, the Eurasian Fund for Stabilization and Development”, said Mukhammedkalyi Abylgaziev.

It should be noted that the Government of the Kyrgyz Republic is currently working on the preparation of a medium-term comprehensive program for post-crisis recovery and economic development.