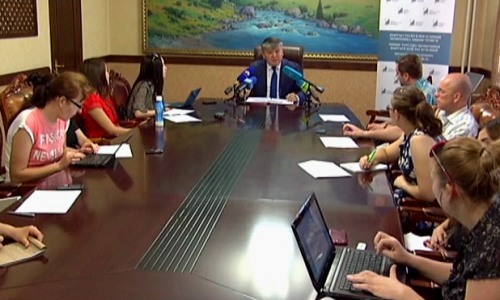 “Guarantee Fund” is created to support small and medium-sized enterprises in Kyrgyzstan. “In Kyrgyzstan OJSC “Guarantee Fund” is created to support small and medium-sized enterprises,”- Minister of Economic Affairs Arzybek Kozhoshev reported at the briefing on Wednesday.

The Fund is created due to increasing demand of entrepreneurs for guarantees and to support entrepreneurs of different regions to obtain loan in case of insufficient collateral.

“The goal of the creation of such a Fund is to support small and medium-sized enterprises. The Government Decree on the creation of Guarantee Fund was adopted On June 23.  KGS 72 million were already allocated from the budget. The Asian Development Fund will allocate about USD 3 million. Besides, negotiations are underway with Russian Kyrgyz Development Fund on allocation in the amount of USD 10 million,” – Kozhoshev reported.

The Fund is created due to an increasing demand of entrepreneurs for guarantees and necessity to assist entrepreneurs in obtaining loan in case of insufficient collateral in different regions.

“One of the important instruments of small and medium-sized enterprise (SME) development is access to finance. However, banks have high requirements for collateral and it should be not less than 120% from loan amount. It is challenging for SME, especially in regions. Most entrepreneurs cannot obtain loan because of this. The Fund aims to increase profitability of SME”, – said Minister.

According to Minister’s speech, the Fund will start its activity soon. “At the moment a procedure for obtaining loans is in process. Chairman of the Fund isn’t elected yet”, – concluded Kozhoshev.